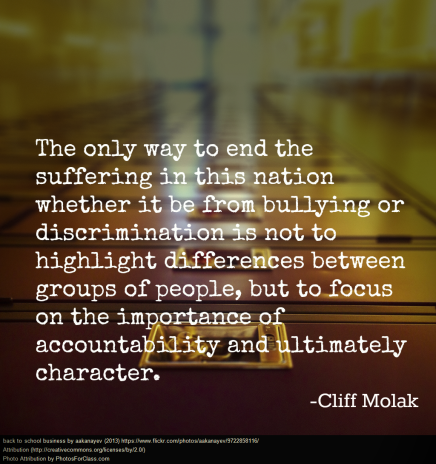 A week ago today, 16-year old sophomore David Molak hanged himself as a result of ongoing cyberbullying in my hometown of San Antonio. Despite transferring last November to a private school in an attempt to escape the digital harassment he’d endured since October (or possibly longer), it continued to follow him up to last Sunday night, the eve before returning to school after the recent holiday break, culminating in a group text that seemingly catalyzed David’s ultimate decision to end his life a few hours later in his own backyard.

In reaction to this family tragedy, David’s older brother Cliff Molak wrote a very moving viral Facebook post in which he shares the advice he gave his brother about the group text received that evening, and goes on to contextualize his brother’s situation within the current dynamic of cyberbullying and its insidious nature:

In today’s age, bullies don’t push you into lockers, they don’t tell their victims to meet them behind the school’s dumpster after class, they cower behind user names and fake profiles from miles away constantly berating and abusing good, innocent people. The recent advances in social media have given our generation a freedom of which has never been seen before. Freedom is a beautiful thing, however as freedom and personal liberties expand (and they rapidly are), there needs to be an equal expansion of personal accountability. Right now there is no expansion of personal accountability. The households and the school systems are failing. The only way to end the suffering in this nation whether it be from bullying or discrimination is not to highlight differences between groups of people, but to focus on the importance of accountability and ultimately character.

David Molak’s situation was unique in some aspects, yet universal in others. His tragic outcome points to serious issues happening under our educational radar, despite the efforts to incorporate and administer lessons, seminars, and assemblies on cyberbullying, digital footprints, and the like from Digital Citizenship curricula, whether home-grown or downloaded.

School as a cultural entity can no longer simply focus on academic learning. This isn’t news to those of us working in schools, or to those outside of education. We talk about bringing in the “real world” by preparing our “Future Ready” students for jobs that don’t yet exist—what about equipping them for the here and now of their “jobs,” not just as students—but as people? We talk about getting to know them as students—yes, this is crucial if we indeed want to foster authentic relationships that lead to authentic learning; but knowing them also means knowing about their world, and bringing that tangibly into the classroom culture as a commonly spoken language, since it really is the real world for them, not the hypothetical one outside the school walls.

The thing is, tweens and teens don’t really know who they are yet—that’s the beauty of being young. Because of this, we can’t really tell them that their identity is not tied up in others’ views of who they are—because that’s not true, that’s not the reality for them. It is the reality.

Adolescents really, really care about what others think of them. When faced with issues like social ridicule because of one’s looks, weight, popularity, wardrobe, ethnicity or even economics, it does no good to say, “this won’t matter in five years,” or “don’t let it get to you,” because they simply can’t help but let it—it’s not just a matter of peer pressure, social ranking or self-esteem; it’s a matter of what their brains prioritize as mattering to themselves, and that is biologically dependent upon how others see them. 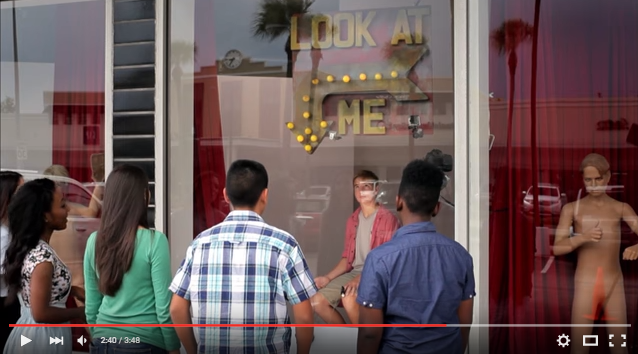 In the recent PBS series “The Brain with David Eagleman,” neuroscientist Eagleman conducted an experiment comparing how a teenager’s brain reacts to stress in comparison to an adult’s brain by measuring their stress response while on display in a shop window and “gawked at” by random passersby. The two teenagers’ brains literally lit up with stress response activity in the medial prefrontal cortex (PFC), which “becomes active when you think about yourself, especially the emotional significance of a situation to yourself.” As a teenager grows, the PFC activity rises and peaks around age 15, when “social situations carry a lot of emotional weight and emotions are in overdrive, especially under stress.”

Add to this the fact that the PFC—which also handles rational thought and decision making—isn’t fully developed until around the age of 25, and you have a case where form not only follows function, but can actually dictate it to a degree. Even though we adults can disregard or ignore how others perceive us, teens physically cannot. Our rationally developed adult brains may tell them one thing, but their evolving teenage brains are telling them something else—what are their brains really saying? That how others perceive them matters, and it’s not something that can simply be ignored because it’s inextricably tied to their identity, their sense of self:

So, we can’t just say, Delete the texts, take down your Facebook page, cancel your Instagram…because it’s still there, a digital persona shaped by their online community in tandem with their own curation, a cultural organism unto itself but inherently tethered to their “inevitable” selves…until they can basically outgrow this phase of painful self-consciousness into one of self-awareness that’s impervious to peer-generated kryptonite. Cell phones have also become digital appendages to teens, so to cut them off means to effectively cut off a part of themselves. With 67% of teens having a smartphone and spending up to 9 hours daily using digital media via their phones, it’s the most prevalent way they deal with media and connect to each other, 45% of whom engage in social media daily, as highlighted in this Common Sense Media infographic based on a 2015 national survey.

So what about addressing the problem head on with counseling? Unfortunately school counselors don’t get to really counsel students anymore, or even have the opportunity to know them as teachers do—they are dealing with class schedules and constant standardized test administrations in addition to maintaining class rankings, records and transcripts, college applications and other mandated responsibilities that have stripped them from getting to counsel students. The counselor in the Glee series, although a comical sendup of a high school counselor, more so reflects the counselors of yore, those who actually had the time to know students and deal with whatever they may bring to their doors. Even Alamo Heights High School (David Molak’s school where the cyberbullying originated) underwent a recent non-related school-improvement process that resulted in hiring a wellness coordinator to deal with students’ drug addiction issues. Yet, why do we need to keep adding on other roles to deal with these issues as if the issues themselves are addenda versus integral?

Could Social Emotional Learning (SEL) then be tapped as a way to address the “accountability” and “character” facets of social media’s freedoms and failings? There is evidence that developing the emotional intelligence of students starting at the elementary level can dramatically impact their academic achievement, especially for those labeled “at-risk,” but what does—or should—effective SEL look like for older students whose social experiences and brains are so different from their previous K-5 environments? Developing empathy via a complex Problem- or Project-based learning experience is one strategy, or reading a novel that shows how a character is dealing with adversity or ridicule has also proved an effective vehicle for developing empathy, but maybe these are too detached from the here and how to act as some kind of buoy for the whirlpool of online socialization teens both navigate and create? 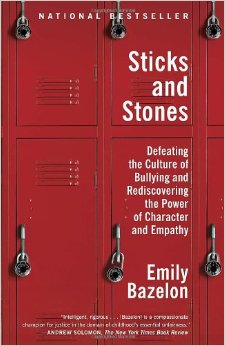 In Common Sense Media’s interview of Sticks and Stones author Emily Bazelon, Bazelon addresses why our emphasis must shift from solely praising academic accolades to also praising “upstander” behavior that intervenes when a fellow student is being cyberbullied. The ultimate message to students should be that “their character and their sense of morality is just as crucial as any individual achievement, or even their own happiness.”

Bazelon recommends some approaches that schools can take to deal with cyberbullying, which include setting the tone for expectations of behavior that reflect a school’s desired climate. She also mentions creating a new social norm, the same that Cliff Molak emphasizes in his Facebook post; the question then is—how do we do this?

Bazelon does believe in basic curricular models as learning tools, but stresses that any curriculum should be influenced by the school community’s needs; those schools that have conducted their own surveys of students and used that data in transparent ways have been the most effective in realizing and establishing a new social norm that works.

Identity and belonging are core elements of the free case-study based  Teacher’s Guide to Sticks and Stones, which may provide a workable starting point for initial conversation or campuswide curriculum that leads to the kind of new social norm Bazelon speaks of.

Yet leveraging a Digital Citizenship curriculum as a potential approach can be problematic if looked upon as a checkbox solution without considering the role of fluency beyond literacy. Whether it’s taught in the beginning of each school year as a stand-alone unit, via a big anti-bullying assembly, or through weekly morning announcements is no guarantee of efficacy, just as interventions and benchmarks are no guarantee of impacting standardized test scores. Even if we hear it, as Cliff Molak alludes to in his Facebook post, we aren’t always really listening. It’s so easy to tune it out when there’s no immediacy or connection to it; just as real learning cannot take place unless there’s an emotional connection coupled with accessing prior knowledge (or experience), teaching anything in isolation doesn’t ensure “stickiness” and ultimate transference.

Plus, the foci of most secondary-level Digital Citizenship curricula deal with creating a positive digital footprint—what image you create online becomes not just a virtual identity but a legacy of who you are. From this stance,  the focus is on the self-generated “I,” versus the “I” generated from how “we” see “you” online. But what about if that “I” is hidden behind anonymous numbers as in the group text David received, or from anonymous accounts and apps, like “Finstagram” (fake + Instagram), a.k.a. “finsta”? Focusing on a digital footprint addresses the “accountability” and “character” aspects per se through the lens of profile and projection, not interaction; what’s missing is the connection factor—how our online interactions are not just extensions of our personas but demonstrable of who we really are behind the facade of what we project.

What does comes to mind now are intentions, like…

being more transparent in how we address what we are doing—and where we want to go—with students;

how it’s not just about the grade, the test, the project;

how it’s not just about preparing them for the future via 21st-Century skills like creativity, collaboration, communication and critical thinking, but cultivating the need-now attributes like empathy, compassion, and kindness;

how it’s not just about the real world beyond the school walls, but the very real world they are in right now;

how it’s not just about learning to be mindful and present, but about being mindful of what’s really happening in their present, non-school world.